It took 30 years for master Italian sculptor Pietro Perti to create more than 2000 pure-white stucco religious depictions and figurines, adorning the interior of the Saint Peter and Paul’s church. Located in Vilnius, the capital city of Lithuania, the church is deservedly considered a pearl of Lithuanian Baroque architecture and design.

The most incredibly detailed masterpiece was constructed between 1668 and 1676. After the builders tools were put down Pietro and his team really started working, and created one of the most stunning examples of Baroque interiors, anywhere on Earth. Finally in 1704, the work was complete.

Entering the church feels like surreal theatre. The harmonious synthesis of sculpture, art, and architecture belies the reasonably austere exterior of the St Peter and Paul’s church. With an all-white motif, the overwhelming play of the intricate stucco figurines is intense and dramatic. Particularly when the lights are switched off. Which, is most of the time.

Although these photos appear in black and white, keep in mind that colour is scarce within the church.The muted colours of the various fresco and oil paintings, including one by the intriguingly named artist “P. Smuglevicius”, are among the only splashes of colour in this decidedly mono-tone space.

Churches in the late 1600’s began to be typified by emotional Baroque embellishments that were an obvious and visible statement as to the power and  wealth of the church. They were designed for mesmerism of the “common” folk. Of course, someone needed to pay for all of this excess, and Lithuanian man The Great Lithuanian Hetman Michał Kazimierz Pac (GLHMK Pac, or H-Pac), stumped up the necessary coin.

Having the church built to celebrate a victory against Russian forces. H-Pac insisted that he be buried under the door-step of St Peter and Paul’s. His tombstone is visible on the exterior with the caption “here lies a sinner”. Aren’t we all, H-Pac, aren’t we all.

Located near the Old Town of Vilnius, the church is a must see. One tip – there is a small box near the alter, in which you can deposit a coin to have the church lights turn on for several minutes. I like this setup. An opportunity to view the interior in either natural light, as it would have been centuries ago, or with select globes showcasing various highlights of the stucco.

Either way, it’s an interior you won’t soon forget.

Personally, I am a huge fan of religious architecture. From this era, most of the great architecture is religious in nature. I’m not alone – my article on the French Gothic Amiens Cathedral continues to be one of the most popular and widely shared articles on Yomadic. There is something compelling about such evocatively decorated interiors, and the Saint Peters and Paul’s church is one of the best there is.

Located at 1 Antakalnio Street, Vilnius, Lithuania –  Saint Peters and Paul’s church is perhaps a 20 minute walk from the Vilnius old town. Entrance is free, a donation is appreciated, and a further small coin donation will automatically turn the lights turned on for a few minutes. Locals will tell you – this is hands down the best looking interior of any historic building in Lithuania.

It’s Lithuania week here on Yomadic.  In the middle ages (15th century), Lithuania was a European powerhouse – today, it’s one of a small group of nations known as the Baltics.  Capital city Vilnius in particular is a fantastic travel destination, with some surprising “attractions”. Check back later this week for a story about what may one day become a new country, within the country of Lithuania.

BTW, I would love to send you the next dispatch, posted from some-where random around this planet (and you'll soon find out why YOMADIC email followers are my favourite followers):
Lithuania architectureLithuaniaSt Peter and St Pauls ChurchVilnius 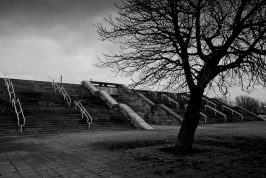 Why Travel Blogs Fail. Insights to a Sordid, Demonic, Community.