The year is 1980. Tom Selleck had emboldened men across the world to grow out their mustaches. Pink Floyd created a protest message for a generation, convincing young X’ers that each of them were, indeed, just another brick in the wall. Women (and some men) matched ripped sweatshirts with high-heels. The Duck and Cover movement gained new traction as desks around America became best-in-category shields against unexpected, but imminent, nuclear inter-continental ballistic missile strikes from the USSR. Yes, 1980 was quite the year. The dystopian future appeared to be awakening, and this time, it was wearing leg warmers.

Straddling the harbor of the downtown Tallinn, the capital city of Estonia, the imposing Linnahall was also a feature of 1980. Now abandoned, the enormously brutal structure was conceived and built for the 22nd Olympiad. The infamous 1980 Olympic games were held in Moscow – capital city of the former USSR, and some distance away from the nearest ocean. And so, the little known ex-Soviet nation of Estonia was selected to host the sailing events. The Kremlin decided to build the extravagantly grey Linnahall venue, to showcase the, ah, concrete pouring expertise of the rising Soviet nation.

Unfortunately, the 1980 Olympics were boycotted by 65 nations, including powerhouse Olympic nations like China, the USA, and West Germany, and so the “in Soviet Russia we know concrete” message didn’t get the television airplay that the Kremlin had so dearly hoped for. Soon after the Olympics, Tallinn’s Linnahall was abandoned.

Organised by the United States, the Moscow Olympic boycott was a propaganda exercise to convince the world that a Soviet war in Afghanistan was bad. However, history tells us the war in Afghanistan was prolonged for another nine years until the late 1980’s, due in large part to the White House supplying billions of dollars and sophisticated weaponry to the militant Afghani group known as the “Mujahideen” – the rag-tag group of militants that were battling against the Soviet invaders. Why does this sound terribly familiar?

Translated as “people doing Jihad”, the USA was financing the very group of Mujahideen fighters that would soon morph to become – the Taliban. Among these future war-on-terror-poster-boys, who in 1980 were sporting genuine shoulder-mounted made-in-America anti-aircraft-missiles, was Osama Bin Laden. When the Soviet War finally ended, Bin Laden returned to Saudi Arabia, a hero. After all, his group of US dollar backed guerrilla fighters had managed to evict the mighty USSR from Afghanistan.

Bin Laden then continued on with the new work at hand, using his new-found military strength to continue the build-up of the secret organisation of Al Qaeda. You may know Al Qaeda for claiming responsibility for such events as the September 11 attacks, among several other particularly dark moments of the last decade or so.

This article was supposed to be about the Linnahall.

Perhaps the moral of the story is, next time I’m in the wonderfully historical city of Tallinn during December, I’ll spend more time checking out the Christmas markets, and less time sitting atop the Linnahall, chatting with visiting French and Swedish students about just how bat-shit crazy this world truly can be.

Travel is helping me to join a lot of dots, that seemingly were always intended to have been joined.

PS, I’m sure a lot of these ex-Soviet states get a little bored with western bloggers depicting their nations as, well, ex-Soviet states. However, the Linnahall is pure-evil, and deserves to be presented in the darkest light possible.

BTW, I would love to send you the next dispatch, posted from some-where random around this planet (and you'll soon find out why YOMADIC email followers are my favourite followers):
Estonia abandoned buildingarchitecturecommunist architectureEstoniaLinnahallSoviet architectureSoviet modernismsovmodTallinn 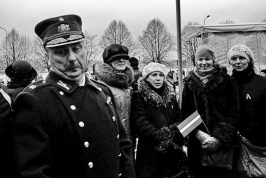 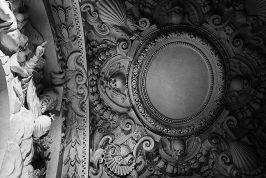