Exploring Communist-era or Socialist-era architecture isn’t on the standard bucket list of most European tourists. The historic old-worldliness of European cities is legendary, indeed, most tourists crave a labyrinth of winding cobble-stoned streets, lined with richly decorated centuries-old buildings – the typical scenes in the “old town” at the heart of most European cities. However, there is a often a much more brutal, and somewhat unknown side to these same locations.

On the outside of the old town, there’s a lesser travelled area of these cities. Here, are the many “new” Communist-era or Socialist-era planned districts and suburbs. Built around the historic downtown cores, the often populous areas are especially common in post-communist post-Soviet ex-USSR, and the formerly socialist Yugoslavian nations.

Zagreb, the capital city of Croatia, is no exception to this practice. Commencing on the edges of Zagreb and bleeding into Novi Zagreb is a hotbed of Socialist-era architecture. Only a few minutes from downtown Zagreb the ornate, picturesque gives way to a collection of starkly brutal and modernist architecture along  a network of wide roads. It’s truly mid-century socialist city-planning on a grand scale.

Leaving the center of Zagreb, and crossing the Sava River to Novi Zagreb, is like entering another world. A beautiful, dream-like, concrete-filled world. Paradoxically familiar, normally unexplored, from the past and yet from the future, I have found that places like Novi Zagreb create a strange nostalgia for a world I have never known.

Novi Zagreb, like many of the planned mid-20th century European cities, was built in the battle scarred shadow of the Second World War. Using a familiar architectural blue print, most buildings can be categorised as perfect evil-genius lair, amazing location for super villain head quarters, or what would broadly and flatteringly be referred to as 1970’s communist chic. Some buildings impress by design, others, by sheer immensity and brutality.

Concrete is the material of choice in Novi Zagreb. Although much of the communist-era architecture is now decayed due to a lack of maintenance, giving a purely dystopian feeling, keep in mind that when first constructed these buildings and the streets that house them were pure optimism-fueled utopia. The architecture and city planning of Novi Zagreb incorporates futuristic mixed-use building designs, surrounded by extensive park lands and efficient public transport networks.

Seemingly audacious planned cities like Novi Zagreb rejected what would soon become known as un-environmental urban sprawl that most Western cities were following. Think of Novi Zagreb as your typical American suburbia, on steroids. The promised land in the style of the mid-twentieth century style. Geometric, efficient, and admirably designed with people in mind.

Communist Architecture Redux – Coming to a City Near You?

Around the world, a revival of brutal and mid-century architecture has taken place – much inspired by the communist-era architecture and city planning of mid-century Europe. From the new Scottish Parliament building, to the planned cities of Korea, city planners and architects are looking at these examples not only for design inspiration, but for solutions to the issues many modern cities grapple with. Lack of viable public transportation, low population density, and horrendously unsustainable suburban sprawl being the number one targets. Although, a primary motivator for the construction of these cities would have simply been to rapidly provide housing for people – in the aftermath of the most devastating war the world had ever seen.

There are many aspects of cities like Novi Zagreb that demand further exploration and explanation, and I hope that people with more expertise than myself would leave relevant links in the comments below.

Ironically, adjectives for communist-era or Socialist-era architecture range from gray and soul-less, to futuristic and expressive. Either way, this style can usually be described as heavy – cubic meters are the name of the game here. Masses of raw mid-century concrete and steel in geometrical formations are one of the main attractions in the former Yugoslavian nations, in my humble opinion.

Communist Architecture – Will It Go the Same Way as Communism?

Part of my reasoning to visit the Balkans this year, is due to the absolute certainty I have that many of these stunning buildings will not survive much longer. Despite some fantastic examples of renovation and re-purposing, the future of most of these unique examples of architecture is far from certain. Many, not all, were not built to last in the first place, and maintenance is lacking – contributing to further decline. Although these are often technologically advanced structures, without regular maintenance they simply will not last.

Public opinion is certainly not on the side of the aesthetic “qualities” of these structures, and none are old enough to typically warrant heritage protection. For example, in nearby Bratislava, Slovakia – the elegant modernist Hotel Kyjev is slated for demolition. I stayed at the Hotel recently, and was sad to hear that Kyjev has now closed its doors, with the new owners wishing to redevelop (destroy) the entire city block. There are some exceptions, but in general, this era of architecture does not attract enough supporters in the right places to be sure about the future prospects.

Continuing my grand tour of the Balkans – this week I find myself in Belgrade, Serbia. Replete with its own Socialist-era”new city” of Novi Beograd, Belgrade just may be considered ground zero of planned former Yugoslavian cities. I’ve already photographed some absolutely spectacular examples of Socialist modernism architecture. Novi Zagreb was just the entree, for fans of this style of end-of-the-world architecture, the main course of Novi Beograd will blow your red socks off. Stay tuned for the next installment.

There is so much more to show and discuss when it comes to communist architecture and city planning. One aspect I can’t comment on – what is it like to live in these buildings? I would love to read stories from anyone who lives or works in buildings of this nature.

And I’m well and truly one of them.

PS, I’ve previously covered the amazing examples of “communist” architecture found in Bratislava, and Zizkov Tower in Prague on Yomadic. In anticipation of some of the comments I may receive about this article – I would like to state that I understand not all of the architects would identify as being “socialist”, “communist”, “Soviet”, or being from “Yugoslavia”. I use these terms simply to identify an era in history, and mostly to assist readers in finding this article. I do welcome any comments anyone has, there is no censorship here.

*  update: as correctly pointed out by an informed comment, to be clear – many of these buildings are technically located in “Zagreb” not “Novi Zagreb”. However, all of the buildings are well outside the “core” of old Zagreb, and indeed, are within moments of where Novi Zagreb officially commences. I have removed the word “Novi” from the article title.

* update, July 2018 : this week alone, more than 60,000 people have read this article. Over the lifespan of this page, there are sure to be more than one million views. One of the photos has now appeared in publication, another has won me a prize. I truly love this architecture, and I’m glad to know the popularity is finally increasing.

FINALLY – while I’m here – as at July 2018, I have been travelling continously for six years, living each day from my backpack. Not one day in six years have I ever unpacked my bag and stopped. I’ve developed a true fondness for Eastern Europe and former Yugoslavia, and have travelled through, and returned to, most countries in the region, regularly.

BTW, I would love to send you the next dispatch, posted from some-where random around this planet (and you'll soon find out why YOMADIC email followers are my favourite followers):
Croatia architecturecommunist architectureCroatiaZagreb 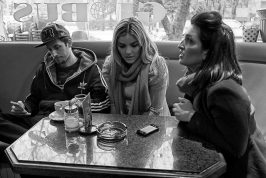 Mean Streets of Zagreb, Croatia – Most Corrupt Nation in The World

76 thoughts on “Stunning Socialist-era Architecture : The Brutalism of Zagreb, Croatia”