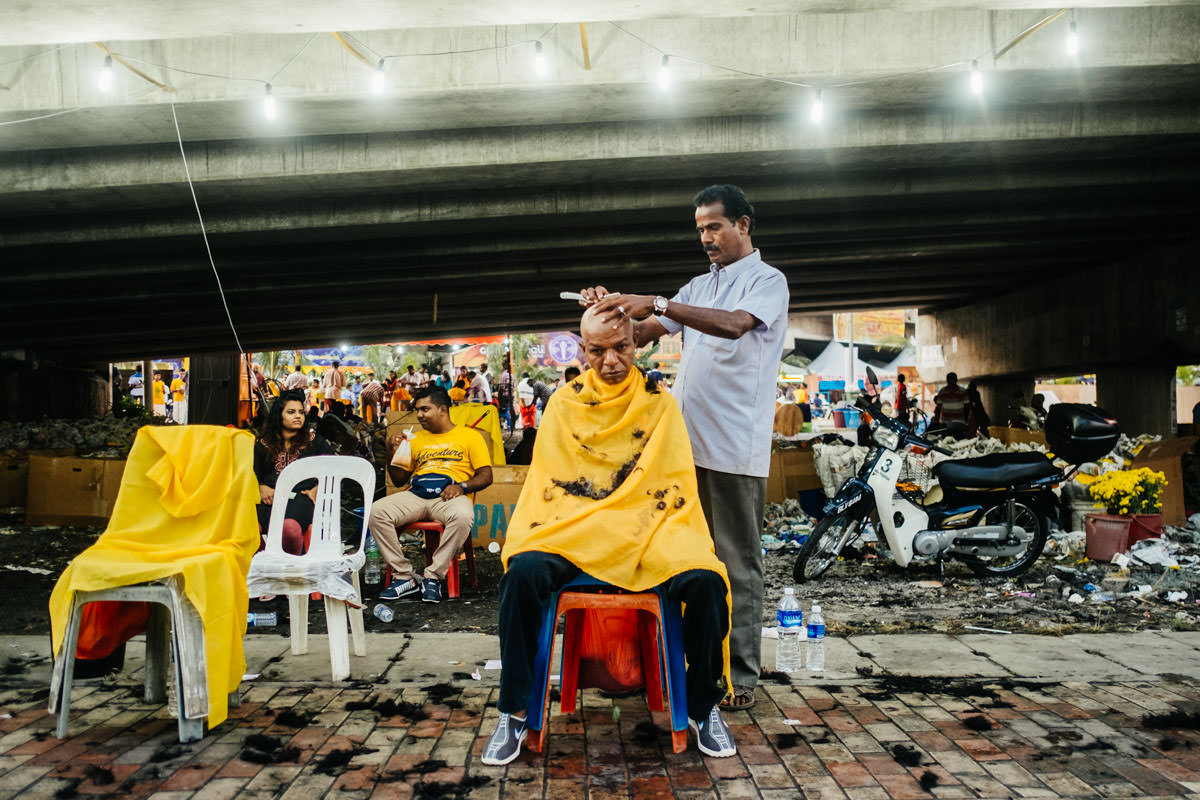 Being thrown into the deep-end of Hinduism – the “Thaipusam” celebrations at Batu Caves, just outside of Kuala Lumpur in Malaysia, was completely unplanned and unexpected. In hindsight, being surrounded by more than a million chaotic Hindus throwing themselves into trances, watching them stab their bloodless faces with cute little miniature spears, puff on cigars, hang fruit from their back-skin using fishing hooks, light coconut-husk spot-fires on the freeway, and build the worlds largest pile of old leather sandals, wasn’t even the most religious experience I had during my brief stay in Kuala Lumpur. That honor goes to the Mui Choy Kau Yoke (AKA “Pork Climax”) at Restaurant Hakka in Bukit Bintang.

Either way, at some point during the wild Thaipusam celebrations, I realised I definitely wasn’t in Western Europe anymore. And, after almost 1300 days of travelling the globe, there was only one reason that could have made me abandon my European travel “plans” at short notice and drag me half way across the planet. That reason, is Shocking Asia, Volume One

In the days long ago, when unknown Asian travel destinations such as Bali were considered exotic and Australian-free, there was no internet. During that slow-paced analogue-era, once or twice a week people from around the globe would visit the local video rental joint for a big stack of fresh VHS cassettes, and a small bag of stale popcorn. In those early days of video, there were only independent mom-and-pop video stores. And seriously, this seemingly digressional story from the ‘burbs is completely related to Thaipusam in Malaysia. Just bare with me.

Usually, Mom and Pop would have an “adult” video section, perhaps a small room down the back, curtained-off and out of view from the main area, sometimes deep within a basement decorated with blow-up dolls sporting sexy stockings and hand-cuffs. The hallowed 18-plus-den-of-iniquity held a far more mature selection of movies and documentaries, and trench-coated creeps would prowl the carpeted aisles, examining the selection of R and X-rated VHS videos. Full colour graphic imagery, splayed out each video cover to entice even the most discerning adult-movie-connoisseur, meant that this area was decidedly off-limits for children.

Like many latch-key-kids of the 80’s, I used to while-away time down at the local mall, cruising with a rag-tag-gang of pre-teen street-urchins. For kicks, we would enter the local video store, and using the camouflage of the kiddies section, make a dash for the adults-only sanctuary. Our time in the forbidden-zone never lasted long. After a few giggles at the wares on display, inevitably, we were kicked out. But, the photos on one x-rated video cover always stuck with me.

Titles like Rochelle Rochelle (one woman’s strange erotic journey from Milan to Minsk) were made for the trench-coat-brigade. However, my curiosity was piqued by the mysterious and frightening cover of “Shocking Asia”. An X-rated documentary about “unusual” Asian rituals, the highlights of Shocking Asia included dead bodies floating on the river Ganges in India, close-ups of sex change operations in Singapore, cannibalism, and nude midget mud-wrestling in Thailand. Shocking Asia went on to develop a cult-following, and was considered so horrific it was banned in some countries. I would gaze longingly into the cover, whenever I was lucky enough to see it.

On my way to the Thaipusam celebration at Batu Caves near Kuala Lumpur, I thought about that video.

As a young teenager, I watched Shocking Asia. Afterwards, for days, I remember yearning to travel. Asia seemed like such a strange, chaotic, dark, foreign land, filled with ceremonial body burning and blood-letting religious customs, it was all so alluring to a kid from the ‘burbs, and I knew that one day I had to see those rituals with my own eyes. Shocking Asia was a better advertisement for Asia than any glossy brochure or big-dollar tourism campaign, and would eventually be the subconscious key in motivating me to finally visiting places like Thailand, Cambodia, Indonesia, and Malaysia.

However, around the year 2010, I spent a night in the beach-side city of Pataya, Thailand. Thus, there is no longer anything in Asia that could shock me, ever again. Pataya is far more shocking than that X-rated VHS, and hopefully I’ll never have to spend another minute in that sickening shit hole, ever again.

So, since I’m rather enjoying my reasonably shock-free life, Thaipusam in Malaysia – even with the head piercings, screaming, and trances – was never on my 2016 calendar.

Just a couple of weeks ago I was on the French Riviera, with no thoughts of anything neither shocking nor Asian. Apart from the occasional craving for a spicy bowl of Laksa. And then, I received some news from back home.

A very close friend of mine from back home is ill, and I was told that right now he could really use as many friends around as possible. It was clear, the right thing to do, was to put my hastily planned tour of European Micro-nations on hold and fly back to Australia, via Malaysia, to the most isolated city in the world.

It’s a good deal – he gets a couple more friends around, and I get to be reminded that “home” really does exist. Then, in about a week from now, once again I’ll leave home and fly somewhere else, to continue my transgressive and recalcitrant lifestyle of semi-homeless peripatetic itinerancy™.

That’s typically where I would end a blog-post.

But really there’s more to this story.

A few years ago near the beginning of YOMADIC, I passed through Kuala Lumpur and visited Batu Caves for the first time. Having really enjoyed my experience, I considered writing a post about the place, but decided that since Batu Caves is already rated as the “number one thing to do when visiting Batu Caves” on TripAdvisor, there wasn’t much of a point. Instead, I wrote about the fascinating Kampung Baru, and made a mental note to never again read TripAdvisor.

Batu Caves is really a great destination, whether you visit during Hindu-packed Thaipusam, or any other day (look out for the coconut-throwing-monkeys). From downtown Kuala Lumpur it’s an easy and inexpensive train-ride away. It’s enormous, religiously significant, and centuries of history, pilgrimages, and traditional celebrations have culminated into Batu Caves being more than worthy of the esteemed TripAdvisor ranking.

At the entrance to Batu Caves, is an enormous golden statue. Amidst the chaos of the Thaipusam celebrations, I learned the story behind this statue. It all begins with the Hindu goddess of love, “Parvati”.

Parvati was married to Shiva – Hindu god, demon-slayer, and regular house-husband. Together, they gave birth to Ganesha – who at first had a human head made from clay, but a nasty “accident” resulted in a full-Elephant-head-transplant. One day, Parvati gave the Hindu god of war, Murugan, a sacred spear. Murugan was a serial wife-collector, who was originally created by Shiva (Parvati’s husband) using nothing but flames emanating from his third eye. One day, Murugan used the gifted “Sri Vel” spear to slay a demon named Soorapadman.

Soorapadman believed he was immortal, and spent his days tormenting people and generally being a jerk. Murugan decided enough was enough, and even though the demon Soorapadman transformed himself into a Mango tree, Murugan wasn’t fooled, and used the spear to split the Mango tree straight down the middle, killing Soorapadman. One half of the now-dead Soorapadman magically turned into a Peacock, and Shiva (Parvati’s husband) decided to use that Peacock as a vehicle, to run errands and get about town.

The other half of the dead-demon-Mango-tree somehow transformed into a Rooster, and Murugan thought hey if Shiva gets a Peacock-car out of this, he may as well stick that ex-half-demon-half-Mango-tree Rooster on his personal flag, forever. And so, he did.

That, is exactly why Hindu’s make the pilgrimage to Batu Caves and celebrate Thaipusam, in the golden shadow of the worlds largest statue of Murugan – to celebrate the slaying of a mango-tree-demon by a serial-wife-collector.

I must admit, I feel a little jealous of those Hindu’s.

Unlike the Hindus at Thaipusam, I’m yet to figure out the precise reason for my own pilgrimage.

I don’t even have a destination.

Fortunately, reasons and destinations are an optional part of any really great journey.

PS, the journey is just getting started. 2016 is going to be an interesting ride – I’ve visited three continents in the first few weeks of 2016 (more on that soon), and have drawn up detailed plans for the rest of the year. That’s not true, I have no plans and could end up anywhere (Iran is a certainty, I’ll be back in April, running another Yomadic Iran Tour (the “Untour”), and then spending some time exploring the North to lay the groundwork for a special future Iran tour).

BTW, I would love to send you the next dispatch, posted from some-where random around this planet (and you'll soon find out why YOMADIC email followers are my favourite followers):
Malaysia 20162017Batu CaveBatu CavesHinduKLKuala LumpurMalaysiaThaipusam