Not so long ago, an architect from California joined one of my Iran tours. We had previously met touring around Chernobyl and Ukraine, and soon discovered our shared architectural tastes. Of course, everything designed by Mike Brady made the list, as did anything featuring the clean lines of mid-century-modern, or the raw beauty of concrete Brutalism – and our conversation was always piqued when the subject featured abandoned structures.

For his Iran tour, the Californian architect extensively curated the local sites, and created an interactive-treasure-map of architectural highlights located all over the country. Whilst devouring his research, clicking on one pin after another, a grainy photo grabbed my attention. Located not far from Tehran, designed by the Frank Lloyd Wright Foundation, Shams Palace appeared like a dream, a surreal amalgamation of everything I wake up and live for – curvaceous, abandoned, concrete.

In the mid-1960’s William Wesley Peters – son-in-law of Frank Lloyd Wright, his protégé, first apprentice, and chief architect of the Frank Lloyd Wright Foundation – responded to a unique architectural calling. Shams Pahlavi, the older sister of the last Shah of Iran (self-anointed King-of-Kings Mohammad Reza Pahlavi), needed a palace to call her own. The end result is simply magnificent – not only one of Iran’s most outstanding homes, Shams Palace is also an important architectural example for the world at large.

However, in the little-known Iranian city called Karaj (population two million, zero tourists), Frank Lloyd Wright’s figurative fingerprints are disappearing fast. Unfortunately, after recently touring through the abandoned and severely decaying mid-century wonder, I have sadly concluded <leans against the fireplace, gazes out the window, removes smoking pipe from mouth> that Sham’s Palace may be experiencing its final days…

Although W.W. Peters exploited the latest in mid-20th-century technology and construction techniques – it’s only after a deep immersion within the historical contexts of Iran that such an astoundingly modern interpretation of centuries of Persian architecture could be revealed. Also known as the Pearl Palace, the elaborate edifice expresses a genuine understanding, and appreciation, of Persian culture and tradition.

For centuries in Iran, there’s been an unbreakable relationship between gardens and buildings. Interwoven with each other, the outdoors and indoors became united in Iran long ago. Visitors to historical Iranian homes will recall the main features of typical estate architecture – traditionally, bedrooms and family rooms open directly onto internal courtyards. Typically, the rectangular courtyards feature manicured gardens, ponds, and open-spaces to work and socialise within the privacy of an extended family unit.

Inspired by this traditional design, Peters decided to create a large, circular, internal garden space, and surround this contemporised courtyard area with various dwelling-rooms. Filled with exotic plantings and ponds, the garden is consolidated with the rooms by an elegant, translucent, domed roof.

Providing grandeur, protection from the elements, and allowing sunlight to penetrate throughout the palace, the intricate dome coerces a graceful ambiance upon those who are fortunate enough to be within. It’s a masterful combination – a layout that charmingly announces a pride in skillfully preserving and modernising the Persian tradition – conceived with state-of-the-art means and materials.

Surrounded by an artificial lake, Shams Palace gently leans against an artificial hill. Plantings wind their way along curving roads, their contours fluidly lead to the main entrance. Once inside, through a relentless harmony of circles and spirals, the interior continually reveals itself as a consequent extension of the outdoors. Floors gently ramp, straight lines are minimised, the sky is everywhere. Shams Palace sits on the boundaries of mid-century architecture – organic, playful, and unequivocally hyper-modern.

Gradually ascending ramps and curved walls enclose a library, banquet hall, dining-rooms, offices, and private rooms. A theater allowed at least ninety guests to attend the frequent events of concerts, dance and films. The private room of the Princess is crowned by a spiral vault – a Ziggurat – the same style of those built throughout Iran and the Middle-East for centuries. Many of the rooms have a view to the inner garden along with the outside view – past the artificial lake and off to the imposing Alborz Mountain range.

Interlocked with the large dome, a smaller dome adjoins and encloses an indoor swimming pool. After descending a transparent acrylic staircase, the pool-room presents an expanse of thick Shag-pile wool carpet, laid right to the edge of the water. Above, the vaulted dome echoes the geometrical design of the main courtyard dome, employing concrete rather than acrylic. Windowed arches surround the pool, providing a connection to the outdoor facilities.

Outside, the facade of Shams Palace continues another Persian tradition – presenting a raw and somewhat brutal facade to the world beyond. Although the curved concrete facade is somewhat attuned to the Persian esthetic of concealing the riches that lay within, a procession of circular glass-disk barricades provide just enough minimalist pizzazz to satisfy the viewer that this was, indeed, the home of royalty.

Decades after Shams Palace was abandoned, the remaining plants are scrappy, but surviving. The largest of the two domes has succumbed to the elements – the cathedral-like array of acrylic glass windows has been completely destroyed, leaving only the metal flower-like framing to cover the once lush cascaded internal garden.

At first, a visitor to Shams Palace may wonder how this could have been allowed to happen. However, the architects of the 1960s would have rightfully considered acrylic windows to be relatively temporary, and would not be surprised by their demise. Generally, acrylic structures are considered inexpensive and utilitarian – seen throughout Iran covering the courtyards of traditional homes and hotels, but perhaps this is the only palace in history that employed such a light-weight synthetic material.

Unfortunately, with the disappearance of the main dome, the decay of the remainder of Shams Palace will hasten, as the elements ingress and the building steadily deteriorates. The damage is already major, and massive erosion of the concrete has occurred. Some of the more protected rooms appear almost untouched, incredibly, much of the original furniture remains – 1960’s Finnish Ball Chairs by Eero Aarnio seem to be exactly as they were left by the poolside.

The question may arise, how did the Frank Lloyd Wright Foundation come to design a building in Karaj, Iran? Like everything in Iran, the back-story of Shams Palace is fascinating, and it must be said, complex.

In the early part of the 20th century, Persia was not as completely united as Iran is today. Sheikh Khaz’al, a tribal leader, controlled the lands around the South West of the country. These lands, although a declared part of Persia, remained stubbornly beyond central control – and the region contained an enormous quantity of oil that had been discovered by British prospectors.

A contract had been signed with the central Persian authority, giving the British exclusive rights to explore, extract, and profit from the oil resources in much of Iran. However, due to the local control of Sheikh Khaz’al, the British government decided in this case that a special arrangement would be prudent. They provided the Sheikh with weapons, gifted him shares in the newly formed Anglo-Iranian Oil Company (later renamed to British Petroleum – BP), and he was knighted by the British monarchy. In return, the Sheikh would use his clout to ensure that the British could take all the oil it wished, uninhibited.

Although the Sheikh was collecting taxes, he paid only a very small amount to the Iranian central government. Becoming ever more wealthy and powerful, the Sheikh became a serious rival to Reza Shah Pahlavi – King of Iran, and the father of Princess Shams.

In large part, thanks to the British withdrawing support for the Sheikh, and instead supporting the father of Princess Shams, King Reza Shah finally conquered the lands of Sheikh Khaz’al. Placed under house arrest, the Sheikh’s assets were transferred to the Imperial Iranian government, and he remained virtually imprisoned under the watchful eye of the Shah for over a decade.

In 1936, an accepted version of history is that the all-powerful Reza Shah directly ordered the assassination of his rival – and Sheikh Khaz’al finally met his death.

At the time of his father’s assassination, Nezam was only ten years old.

Despite the history of his father, or perhaps because of it, Nezam Amery grew up a member of the privileged classes, and had the opportunity to study abroad. He decided upon architecture – and enrolled at Kent State University in Ohio, USA. Nezam Amery became deeply interested in the work of Frank Lloyd Wright. A successful student, Nezam was accepted to commence an architectural apprenticeship with the Taliesin Associated Architects – a division of the Frank Lloyd Wright Foundation – founded by Wright’s protégé and son-in-law William Wesley Peters to continue Wright’s architectural vision.

Returning to Tehran, Amery created an architectural practice, where he became the Middle East Representative of Taliesin. His firm shared joint interests with Taliesin, working on architectural and city planning projects in Iran and Iraq. Upon being awarded the commission for Shams Palace, Nezam Amery invited Taliesin to participate.

Nezam Amery was the indispensable link in the Frank Lloyd Wright/Iran/Shams Palace story – and his father had been assassinated by the father of his client, Princess Shams.

In 2003, Shams Palace was finally registered by Iran’s National Heritage Foundation. However, despite being recognised as an important historical monument deserving restoration, since this time the condition of the palace has further declined.

Restoration would now be incredibly expensive – and there is certainly no financial incentive. Iranians would not pay more than a token entrance fee, and foreign tourists in Iran remain few. In 2018 a capitulation of the Rial has occurred, part of the ongoing effects of forty years of economic sanctions that have prevented Iran from fully participating in the international economy. Iran currently has much more to worry about than the restoration of the Pearl Palace – after all, this is just one of an astounding nine-thousand registered historic sites located all over the nation.

For a brief time some years ago Shams Palace was open for tours.

Currently, the palace is off-limits.

Gated and guarded, away from the public eye, the truly visionary interpretation of mid-century-modern Iran slowly returns to dust.

PS,  due to popular demand, the final two Yomadic Iran Tours  for 2019 have just been launched. All other 2019 tours sold out quickly. I really would like to show you the most fascinating destination on the planet, please don’t forget to bring your camera…

PPS, hello from Shiraz – for sure my favourite city in Iran. For continuity – I’ve now been living from my backpack for 2313 consecutive days, and I’m just getting started. Hope you have a wonderful day, wherever you are.

BTW, I would love to send you the next dispatch, posted from some-where random around this planet (and you'll soon find out why YOMADIC email followers are my favourite followers):
Iran abandoned buildingarchitecturebrutalismbrutalistFrank LLoyd WrightIranKarajmid-centuryMike BradyPearl PalaceTehranurbex 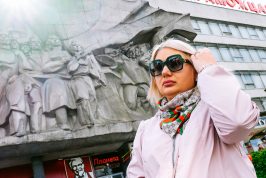