The Millennium Cross, located on Mount Vodno overlooking the amazing city of Skopje in Macedonia, really is the biggest cross on Earth when it was completed. Let’s get the obvious question out of the way – at 66 metres tall, the Millennium Cross is about the same height as a twenty-storey skyscraper. New York’s Statue of Liberty (minus the pedestal) is a mere 46 metres high. That rather-large Jesus, overlooking Rio de Janeiro is just 40 metres, including the pedestal. View-able from all over Skopje, by day or night, on a natural perch a kilometre high – the Millennium Cross is one Macedonian tourist attraction you won’t want to miss. Up close.

Hiking up the mountain is tough. It’s a real workout, taking several hours of strenuous exertion. Make sure you take plenty of water, warm clothing, and sturdy hiking boots. And that, is the advice I would give to those crazy enough to actually hike up to Skopje’s Millennium Cross. For the more sensible among us, it’s cheap and easy to make use of a remarkable combination of public transport. After a gentle 30 second or so hike at the end, you too can “bag the summit”. That’s mountaineering talk.

Yomadic is certainly not Lonely Planet. With former posts including a feature on Polish prostitutes, some may say that’s pretty obvious. However, given the lack of complete information about the Millennium Cross, an article outlining everything you need to know about the famous Skopje cross would be handy for anyone fortunate enough to find themselves in this part of Macedonia.

How to Get to the Millennium Cross in Skopje by Bus

Good news! You can catch a public transport bus to the Millennium Cross. The bus leaves from the main bus station in Skopje, located about a ten minute walk from the center of the city. Look for the small sign that says “KPCT” – obviously, Macedonian for “cross”. The buses come about every 30 minutes. En-route, the bus travels through the city, stopping at various places – you can jump on board anywhere it stops. The price is 35 Denar each way – about 70 cents US. Tickets can be bought on board from the driver, and the journey takes around 15 minutes.

What Time of the Day Should I Visit The Millennium Cross

From a photographers perspective – in the afternoon, the sun will be behind you as you look down on Skopje below. Of course, the dawn would be pretty spectacular. You’ll have to ask somebody who gets up earlier than I do, for a trusted opinion. The only problem with visiting the Millennium Cross later in the evening is that the buses stop by about five o’clock – so plan accordingly.

After the bus stops in a car-park nowhere near the top of Mount Vodno, the fun part of the journey begins. The “Millennium Cross Ropeway” is a cable car that will take you the last 2 kilometers to the top of Mount Vodno, right to the base of the towering Skopje cross. A truly incredible view unfolds over the 8 minute journey to the top. Tickets cost 100 Denar (two bucks US), for a return ticket. Only completed recently, the cable car system was built by an Austrian company (they know cable cars), and is a really nice way to travel.

A taxi to the same car-park as the bus stop, will cost whatever you can negotiate. I’ve been told $5US – $10US. If you have a car, you can drive yourself to the same point, stopping along the way at the various lookout points. The views down to Skopje are seriously beautiful.

Have a wander around. It’s a historic site, and it feels like it. Panoramic views of mountains, a city beneath you, and plenty of remarkable places to sit and have a sandwich. Some tourist attractions are better referred to as tourist traps. But a trip to the Millennium Cross is one of the good-guys of tourist attractions. At a total cost of $3US dollars and an hour or two of your time – it’s a journey you won’t soon forget.

Skopje is in the middle of a construction boom. Completed only in 2008, the Millennium Cross is representative of the ongoing effort to put Skopje onto the world stage. And what a location – there’s not many capital’s that can boast such a mountain right in the middle of the city.

Hopefully, this article finds it’s way into the hands of someone who needs to find information about the Millennium Cross of Skopje.

Because, even though you can see the cross from all over Skopje, it really is worthwhile to check out the the top of Mount Vodno.

Get up really early, pre-dawn, trek to the top, and bag that summit.

PS, personal update – I have left Skopje. But, not Macedonia. More on that shortly. I will be returning to Skopje for another spell of communist-era architecture exploration. For fans of mid-century concrete, you will love it. 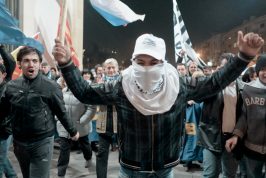 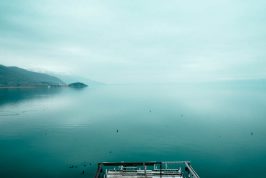 Lake Ohrid, Macedonia. Could Somebody Give Me A Good Reason To Leave?