Secretive Artist “Invader” takes on the African Island of Dreams

For thousands of years, waves of religious crusades, military conquests, and revolutions have done as much to shape Djerba, the largest island in North Africa, as the swell from the Mediterranean Sea. Before and after Caesar and Hannibal – the Romans, Arabs, Phonecians, Ottomans, Berbers, and others, have claimed the “Island of Dreams” as their own. Not surprisingly, Djerba today is a Tunisian island of cultural diversity with little comparison to any other.

Other than culture, it’s the white sandy beaches, pink flamingos, and relentless blue skies that continue to attract invaders. The most recent (and in progress) French invasion of Djerba, began in November 2019. However, it started in Tokyo, Japan during 1978 – when one of the most effective, dominant, invaders in the history of the planet was created.

Founded by a Ukrainian businessman in 1953, “Taito” was the first company to distil and sell Vodka in Japan. Within a decade, Taito evolved into a manufacturer of jukeboxes, and then, video games. In 1978, Taito engineer Tomohiro Nishikado created a high-tech game that would be nothing less than the dawning of a new era for our planet. Unwittingly, Tomohiro had set in motion an uncontrollable global invasion, and for billions of people, life would never again be the same.

All the children of the world became addicted to Nishikado’s creation. Unsupervised by adults, frenzied and hypnotised, they began to congregate in malls to play the new machine. Spreading across land and sea, the world soon discovered that no child was immune. In the UK, the parliamentary record of the day recalls children as “crazed”, “eyes glazed”, “oblivious to everything around them, as they play the machines”.

Politicians passionately debated this new “force of evil”, trading apocalyptic stories of petty theft, violent crime, and assorted vice from their constituencies. Like the teenage boy so desperate to play the machine, that he had sex with a priest, before blackmailing the clergy and demanding money to feed his addiction. Or the young child who disappeared for days on end, reappearing only to steal coins to feed into the machine. It seemed children would do anything in a bid to maintain their habit, and perceiving a danger posed to the wider community the British government soon tried (and failed) to outlaw the “Space Invaders” game.

In Japan, the sacred home of Space Invaders, a twelve-year-old boy armed with a shotgun held up a bank and demanded nothing but coins. Police arrested a nine-year-old girl for stealing $1500 from her neighbours home, then running away to an offshore island to play the game. Newspapers reported the arrests of thirty-three young boys who went on an “orgy of shoplifting”, to satisfy an obsession being considered as an existential threat to society. The Bank of Japan tripled production of 100 Yen coins to stave off a national coin shortage, and the Japanese government would also try, but fail, to ban Space Invaders.

For the first time in decades, a frightening and unknown future occupied the planet. In a single year, 11.2 billion coins were slotted into the new machines, as police in Rhode Island, USA, arrested a gang of twenty-two children on charges of stealing from parking meters. American Doctors recognised “Space Invaders Wrist” as a legitimate medical condition. Texans debated all the way to the Supreme Court – in a failed bid to ban anyone under the age of 17 from playing Space Invaders without adult supervision.

By the early 1980s parents were voluntarily leaving their children in random public places, realising Space Invaders could easily fulfill most of their parental duties. Lawmakers and guardians of conservatism, sensing the impending breakdown of society, tried in vain to inform the public that Space Invaders was the driving force behind everything immoral. Unemployment. Violence. Crime. Deviancy.

Those days were equal parts thrilling and traumatic, and are now all but gone.

However, visting Djerba, Tunisia, bought it all back.

An anonymous French artist known only as “Invader“, has also been affected by a life-long addiction to the pixelated imagery of Space Invaders. Over a period spanning more than two decades, Invader has illegally installed thousands of mosaic artworks in prominent public places all around the globe. His collective body of work, modeled after alien enemies from the game, now comprises over one million ceramic tiles.

More than thirty countries and seventy-nine different cities have already been “invaded”. During his most recent invasion, more than fifty-eight unique mosaics appeared all over Djerba. Although anyone who lived through the original era of Space Invaders will now be flooded with nostalgia on Djerba, it’s been fascinating to notice the aliens have a mesmorising allure to almost everyone that accidentally discovers them – whether familiar with the artist, or the original inspiration, or not.

In Djerba, the ceramic aliens sit alongside pixelated-versions of local pottery, fish, date palms, and cans of local Tunisian “Boga” soda. Silently, the alien immigrants occupy the walls of mosques, synagogues, hotels, resorts, coffee shops, and abandoned Star Wars film sets. Despite their questionable legality, there is a genuine sensitivity to the contextual surroundings of each “invader”. Installed in plain-sight, they often seem right at home – disguised only by their innocent frivolity and a sly wink towards local traditions.

I’ve pointed out the invaders to people from all around the world and noticed an attraction that’s immediate, even passionate – it’s rarely this unanimous in the polarising world of street-art. The simple iconic imagery is deceptively appealing, and before long every person who noticed one “Invader” would be helping me to discover more. Hunting down the aliens all over the island becomes, well, addictive.

Of course, in between Invader-spotting, discovering the other highlights of Djerba island is a pretty great bonus (or vice versa, as the case may be).

Despite the subversive nature of the installation, local authorities see this particular invasion as a boon to aid Djerba’s ailing tourism numbers. On an island more familiar with invasions than most, amidst a global pandemic, their arms are not as open as usual. In the future tourist numbers will again increase. And as for the life of the mosaic invaders, I would assume they face a similar fate as experienced in other locations around the world.

Many years ago my home city was invaded. At first, despite being easily seen, the new aliens go unnoticed. Before long, perhaps upon the realisation that each individual character is part of a larger family Invasion, they gain an admiring gaze from the wider community. As time continues, they become like familiar friends, and family – they’re loved. Later, as their numbers thin, all of the remaining survivors are protected. Their destruction or removal is met with deep sadness. Finally, they gain rights – the state will deploy resources, almost at any cost, to keep the illegal invaders safe. Their fate, here and around the world, is to transcend to a level beyond anything the artist could have ever imagined.

Invader remains anonymous, and his parents believe he’s a tiler in the construction industry.

PS, earlier this year (pre-pandemic) I spent a couple of months travelling around Tunisia, visiting Djerba island several times. During February I had the pleasure of running a series of Yomadic Tunisia “Untours”. In March I led a special Tunisia tour for Atlas Obscura. Unfortunately, during the third back-to-back sold-out tour, we received sudden news of an imminent nation-wide Tunisian lock-down. The decision was made to rush from the Sahara desert to the capital city, and get everyone on flights as soon as possible. With hindsight, this proved to be the correct course of action. Tunisia was completely locked down to international travellers in March, along with many other countries. When the situation changes I’ll return to Tunisia, and Iran, and the places I already miss – and so will Yomadic “Untours”.

Thanks for reading, hope you’re well wherever you are on this planet.

BTW, I would love to send you the next dispatch, posted from some-where random around this planet (and you'll soon find out why YOMADIC email followers are my favourite followers):
Tunisia artDjerbainvaderspace invadersTunisiaTunsiavideo games 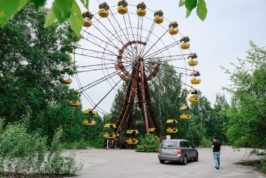