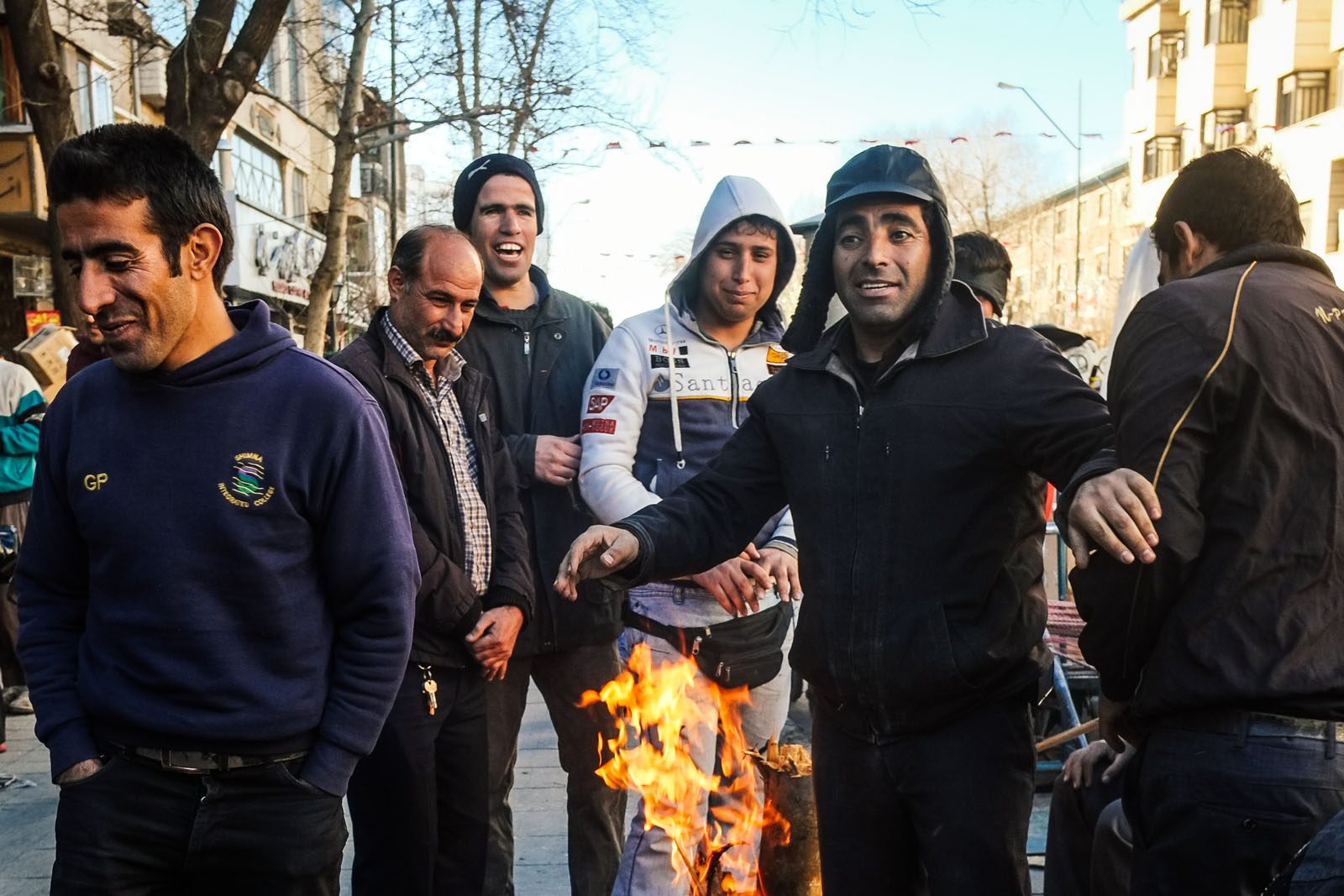 The logistics are simple. Fly to Dubai, arrive at the busiest airport on the entire planet. Transit to Shiraz, Iran – flight time, less than an hour. Various airlines, every day, take your pick. I paid less than hundred for the ticket. Just outside of Shiraz is Persepolis – the UNESCO World Heritage listed ruins of a 2500-year-old city. An array of beautifully decaying marble and stone. Walls, columns and buildings adorned with richly carved scenes of ancient battle and ceremony. Giant stone tombs of Persian kings, once filled with unfathomable riches. Street art fans, there’s even vintage graffiti, engraved by British and American explorers centuries ago. In the distance, across desert plains, strange and geometric flat-top mountains complete the disorienting experience. And five minutes down the road, there’s an ancient necropolis built into a towering cliff face. Two impressive sites, both easy to get to, and the entrance fee is three bucks. Three bucks. But this is the kicker – in the four hours I spent at Persepolis I saw exactly two other Western tourists.

Of course, it is Iran. So there’s a good reason for the lack of tourists.

Here’s the analogy that explains it all. Millions of people around the world believe McDonalds has “healthy choices” on their menu. But, eat enough McDonalds, and you will die. Being dead is not a healthy choice. It’s being dead. Advertising, lies, propaganda, sleight of hand, public relations, marketing, pure bollocks, call it what you will, it works. Humans will believe anything if you repeat it over and over with enough “authority”.

We find it hard to accept some “truths” because we’ve been told “untruths” over and over. Water doesn’t rotate in different directions in each hemisphere. No, shush now, it really doesn’t. The Great Wall of China isn’t visible from space. Not at all, not even a little bit. Napolean was about average height for a French man, humans didn’t evolve from Chimpanzees, Kim Kardashian’s booty isn’t really that oily, and unfortunately Disneyland isn’t actually The Happiest Place On Earth™.

Imagine taking a vacation to Disneyland. You’re shuddering, but the chances are, you’re not thinking about colliding monorails engulfed in flames. Or wild brawls on Main Street USA. Certainly, you’re not recalling the sexual assaults and lawsuits that were filed against the characters playing Donald Duck, Goofy, Tigger, and even Minnie Mouse. Or the deaths on the Downhill Double Dipper, Rock N’ Roller Coaster, and the Tower of Terror. I’m not making any of this up. It’s horrendous at Disneyland. It’s pretty much The Saddest Place on Earth™.

And yet, people still travel to Los Angeles. LA, home of the Crips, Bloods, Hells Angels, Ducky Boys, Baseball Furies, The Lizzies, and over one-hundred-thousand heavily-armed hardcore full-time gang bangers, with a right, left, right, left, you’re toothless, and then you say goddamn they ruthless, but you just want to visit the possibly anti-Semitic theme park. Because, Disneyland is “safe”. And if ya got yourself (yes, that’s an incorrect use of a reflexive pronoun) an Uzi and your brother a nine, Los Angeles is mostly family friendly. Mostly. So for generations, tourists from around the world have skipped Dubai and Shiraz and plied their way to LAX, bound for Disneyland’s good, clean, some may say Nazi-inspired-corporate-happy-fun-times (any lawyers reading this, please, do let me know if I’ve crossed any lines so far), because it’s safe.

But nobody visits Iran, because Iran is dangerous.

Well, the truth is this: Iran is safe.

Much safer than, for example, California.

Yes, I just drew a comparison between tourist safety in Disneyland and Iran. Sure, maybe I don’t have time for esoterica like “facts”. I haven’t backed any of this up with “statistics”. But, I’ll wager that for tourists – Los Angeles is significantly more dangerous than Iran. And I’ll take a stab and say that more tourists have experienced “danger” in Disneyland than Iran, no matter how you would like to measure it.

Iran is safe. It’s simple. Safe, as in, not dangerous. There are no caveats with that sentence. Like “well…sure, Iran is sorta safe, unless…. “, or “well, look, I don’t want to give you a false impression, Iran is safe, but….”. No. Nothing. Just safe. Maybe you’ve heard Iran is dangerous. You heard wrong. In fact, Iran is relentlessly un-dangerous.

But, unless… no. Iran is safe.

There is no but.

OK, when I say “none”, I’m only slightly exaggerating. The truth is, there are so few Western tourists in Iran that if you wanted to, you could meet most of them over lunch. When tourists spot each other in Iran, they say hello. It’s rare, and it doesn’t happen every day. So, we say hello. Have a quick chat. Or, at least, nod, wink, and smile knowingly at each other. Because, yeah, we know. Some suckers are at Disneyland, or even worse, London*, and we’re in fucking Iran.

Perspepolis is just the beginning of the enormous list of Iranian attractions. Iran has it all. Dry empty deserts, snow-capped mountains (with ski-fields), lush forests, sandy beaches, sub-tropical islands. The largest lake in the world so huge that it’s usually known as a sea. A countryside dotted with a seemingly endless variety of ancient structures and monuments, thousands-of-years-old villages hand built from mud and straw, and a modern metropolis whose urban area holds more people than London, Hong Kong, Paris, or Chicago, and maybe none of that appeals to you, but chill out brah because there’s way more to Iran than would fit in this paragraph. Much more.

I’ve now spent two months in Iran and haven’t scratched the surface. There’s so much to experience in Iran, so many sights both ancient and modern, not to mention the friendliest, most welcoming people on the planet – from a huge variety of cultures and ethnicities. But even with all the media bias, the crazy thing is, I still can’t believe how few tourists there are. For now, Iran is tourist heaven.

Hearing tourists who complain about being surrounded by other tourists, I know, it starts to sound a bit pompous. But, there’s a point. I have no problem with being called a “tourist”, because that’s what I’ve chosen to be, every day for more than 900 days straight. Although as I’ve been told, “Nate, you’re not a normal tourist”, and sure, that’s sometimes followed by “Nate, you’ve had enough to drink, really buddy, you’re out of control”, but the point is, I’m not too modest to say, with some authority, I know exactly what almost every tourist in this world wants.

Of course, we all have different tastes, but I would venture an educated guess and say this:

What most tourists want, is Iran.

One day, when all the potential tourists of the world start to realise that almost every single thing they’ve ever read or heard about Iran is at best a distorted version of reality or at worst just outright bold-faced lies and dirty propaganda, well when that day comes, those newly enlightened tourists will visit Iran, en-masse.

And the day after that, perhaps the greatest travel opportunity of the century, will have changed forever.

PS, Iran. October. Almost sold out. Click here and check it out, I’d love you to join us.

PPS, I’ve still got plenty more Central Asia and Iran photos and stories to work through, but for now, you can always read everything I’ve ever written about Iran by clicking here. Currently, I’m in Budapest, Hungary.

BTW, I would love to send you the next dispatch, posted from some-where random around this planet (and you'll soon find out why YOMADIC email followers are my favourite followers):
Iran DisneylandDucky BoysIranPersepolisShirazTehranYazd