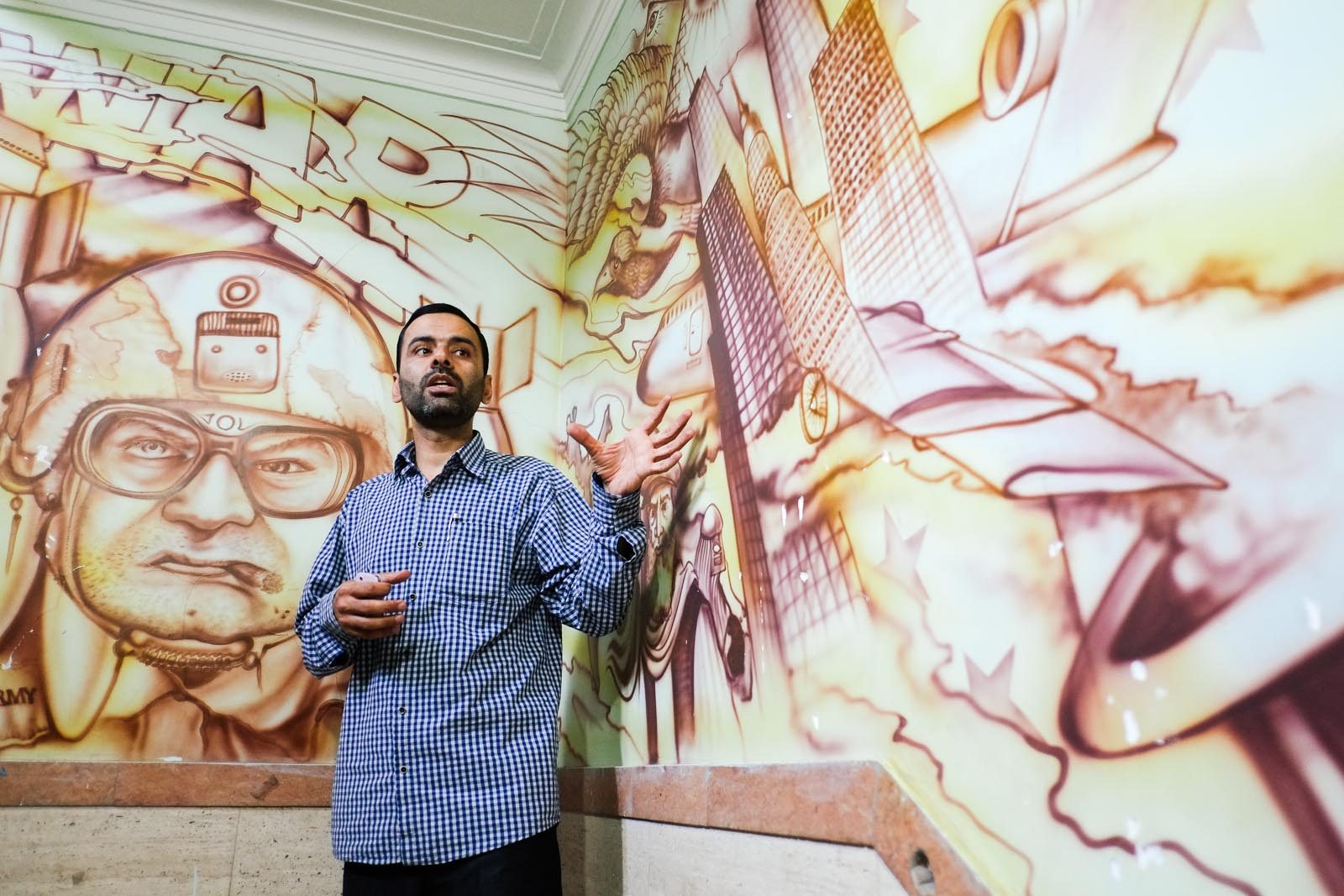 The former US Embassy in Tehran, Iran – AKA the Den of Espionage, has an uncanny architectural resemblance to a Californian high school. At least, the high schools you see on TV and in the movies. Brandon and the gang from 90210 would be at home here in Iran, bouncing down the steps, a flurry of chambray, leg-warmers and giant cell phones, jumping into Kelly’s totally rad cherry-red drop-top BMW, and cruising down to the Peach Pit for an after-school root-beer-float.

But, I reminded myself, I was in Iran, not Beverly Hills, and I marvelled at my inane ability to be so totally and utterly distracted by cheesy 80’s American TV, even in the midst of probably the most infamous site anywhere in the Islamic Republic of Iran. I pulled myself together, firmly wiped my dirty Jordan’s on the “Down With USA” doormat, and stepped into an access all areas, take as many photos as you like, private tour of the American “espionage den” in Tehran. Sometimes, when you’re in Iran, it’s handy to have a friend, who has a friend, who’s Uncle knows a guy.

Before our multi-national gang of trippers entered the building, it all seemed so normal. We strolled a lovely path through the rarely-seen grounds of the former US embassy, avoided sprinklers watering lush lawns lined with roses, and awaited at the entrance for our “guide”. It didn’t take long for things to move into a world even more surreal than a Hollywood high-school. Outside the front entrance of the embassy, a bronze Statue of Liberty stands proudly, stomach removed and replaced with a cage containing a white dove. Our first translation came, and it was a pearler. “The statue represents the American government, who have taken freedom and liberty away, from even their own citizens”.  Oh, wow. I fanned my face and walked up the steps, entering where even Ben Affleck had not dared to tread.

The thing is, being toured through a regular “embassy” would be fairly boring. “Over there is the desk where John sat, there’s a filing cabinet, umm, in here’s the coffee machine, and well, on Fridays we sometimes wear Hawaiian shirts. So, ah, ummm, go ahead and take a pic of the photocopier if you like. However, it would soon become clear, this was not a regular embassy. This was an extensive, sophisticated, cutting-edge, state-of-the-art spy-base, constructed in secret by a rogue state on foreign soil. Rogue state = USA. Foreign soil = Tehran, Iran. Chances of me ever entering the US again, rapidly declining.

Recent revelations from whistle-blowers such as Edward Snowden have shown how the US government is spying on billions of emails, phone calls, and as much internet traffic as their systems can handle. The Iranians who stormed and took over the US Embassy in Tehran more than three decades ago, would not be surprised in the slightest, to see the level of monitoring that the US government is capable of today. And, that was the implied narrative of our private “tour” – we were not inside an embassy, this was a “Den of Espionage”, a concerted effort by the US to spy on Iran, from the comfort of downtown Tehran.

The commentary and narrative was optional. We had a choice – wander around freely, or listen to a local custodian explain and opine about the building, its contents, and the events that took place here. After passing underneath the “we will make america (sic) face a severe defeat” sign, we spread out on the stairs up to the second level, and began to listen to the first of many commentaries that day, with translation into English provided by an Iranian friend. The stairwell was adorned with graffiti-like aerosol art, and the first mural depicted the World Trade Centers being destroyed.

“So, look, he’s just sayin’, that’s all”.  The translation from our guide was that many engineers and experts in the USA agreed that fire alone could not bring down the twin towers. No alternative explanation was offered, just that perhaps we don’t yet know the full story. I looked around. People were smiling. This was rapidly becoming a full-immersion experience, and we had only been in Iran around 24 hours.

Personally, I wanted more info before we moved on. I wanted to ask his opinion on the events of the 11th of September 2001, like how a few men armed only with box-cutters directed by an old man on dialysis sitting in a cave fortress halfway around the world used a satellite phone and a chunky laptop to direct a sophisticated penetration of the most heavily defended airspace in the world, where some guy hijacked a commercial aircraft and flew wildly off-course for over an hour, wasn’t intercepted by a single jet-fighter, before the hijacker – who couldn’t handle a single-engine Cessna – expertly flew a Boeing 757 in an 8000-foot two-hundred-and-seventy-degree-corkscrew-turn, descended to come exactly level with the ground, hit the Pentagon, and yet no footage of the plane hitting the Pentagon has ever been seen? So many questions. But, I thought that perhaps the rest of my tour group may think I was a tin-foil-hat-wearing-bat-shit-crazy-conspiracy-theorist, so I didn’t ask.

Along the tour, there were a few remarks about the equipment, the events that went down here, a couple of versions of “make your own mind up, but hey, the US government really is pretty shifty”, and a mention of the number of African Americans being killed by Police over in the USA, as well as the obsession Americans have with pornography and being controlled by the mass-media. There may have been some questionable statements about human organ harvesting and Israel, however, one thing was for sure – this was an American spy base. A veritable slithering nest of spies, or Den of Espionage if you will.

There was an abundance of physical evidence – we entered the embassy “office” by walking through a bank-vault-door. Other doors had retina-scanning locks. The worlds most advanced computer and communications systems (in the 1970’s) were still inside, and we were shown a book containing painstakingly-restored shredded documents – outlining the CIA takeover of Iran that never came to pass. To this day, many of those documents remain classified by the United States government. Our guide smiled and laughed as he showed us the book. Copies were promised.

We entered an office with forgery equipment, without our guide, and examined the equipment. Maybe the array of blades, paints, glue, photos, inks, pens, and official looking replica-documents were just there to make really elaborate Mothers Day cards. In any case, it was around this time that I was convinced – anyone who explored this building, walked around, and kept an open mind, would conclude they were standing in a sophisticated espionage center.

Back outside, I asked another Iranian friend to translate one of the many murals adorning the front perimeter wall of the Den of Espionage. She looked back at me with an expression that clearly says “this is so embarrassing that foreigners have to see this shit”. The message was some kind of generic “we will crush the USA under our feet” propaganda. It’s right near the mural of the statue of liberty with a skull-face. Yes, it’s a little corny. Her look told me what I already I knew – if I wrote an article about this place, it would annoy so many people – Iranians, and Americans.

The messages that come from here don’t represent the thoughts or opinions of most Iranians. Many Americans are concerned with the extreme invasion of privacy that their government is responsible for. There are citizens of both nations that don’t agree with the actions their leaders have taken over the last few decades. This isn’t a place for the moderates or the I-don’t-carers. The Den of Espionage attracts the stories of the hard-liners from both sides. It’s impossible to write about this place, even with tongue firmly in cheek, and not piss somebody off.

My last intention is not to display the Den of Espionage as being representative of mainstream Iran. Because it’s not. And focusing on this one building to represent the relationship between the USA and Iran only serves to turn a complex series of events, that have taken place over more than fifty years, into a histrionic pantomime of good vs evil. Ben Affleck, I’m looking at you.

The truth is, I absolutely loved the Den of Espionage in Tehran. It’s a fascinating, historical, unique place – that is rarely visited by foreigners. I loved hearing a point of view that I don’t normally hear. I especially loved the explanation of what would happen should Iran ever be attacked by Israel:

“If Iran is attacked by Israel, we will make every city in the entire land of Israel, the same level as the sand.”

It was a rough translation. After saying the words out loud, my Iranian friend smiled, moved his right hand onto his chest, pointed at the embassy guide and added “oh… I wish you could understand Persian, this man is making it sound so much more beautiful than my translation, like, you know, he’s saying how all the cities in Israel would be flattened like sand…”

Yeah, I pretty much understood what he was saying the first time.

PS, I’m currently in the city of Shiraz, Iran, having just finished the first Yomadic Iran Untour. A small gang from Canada, Australia, and New Zealand had the time of their lives. And I think it was the best two weeks of my entire travel life.

PPS, Iran is spectacular, amazing, incredible, and by far the most interesting and exciting travel destination in 2015.  UPDATE: both trips are sold out. Sorry!

BTW, I would love to send you the next dispatch, posted from some-where random around this planet (and you'll soon find out why YOMADIC email followers are my favourite followers):
Iran Beverly Hills 90210Den of EspionageDen of SpiesIranTehranUS Embassy

7 thoughts on “Den of Espionage – Inside the Former US Embassy in Tehran, Iran”