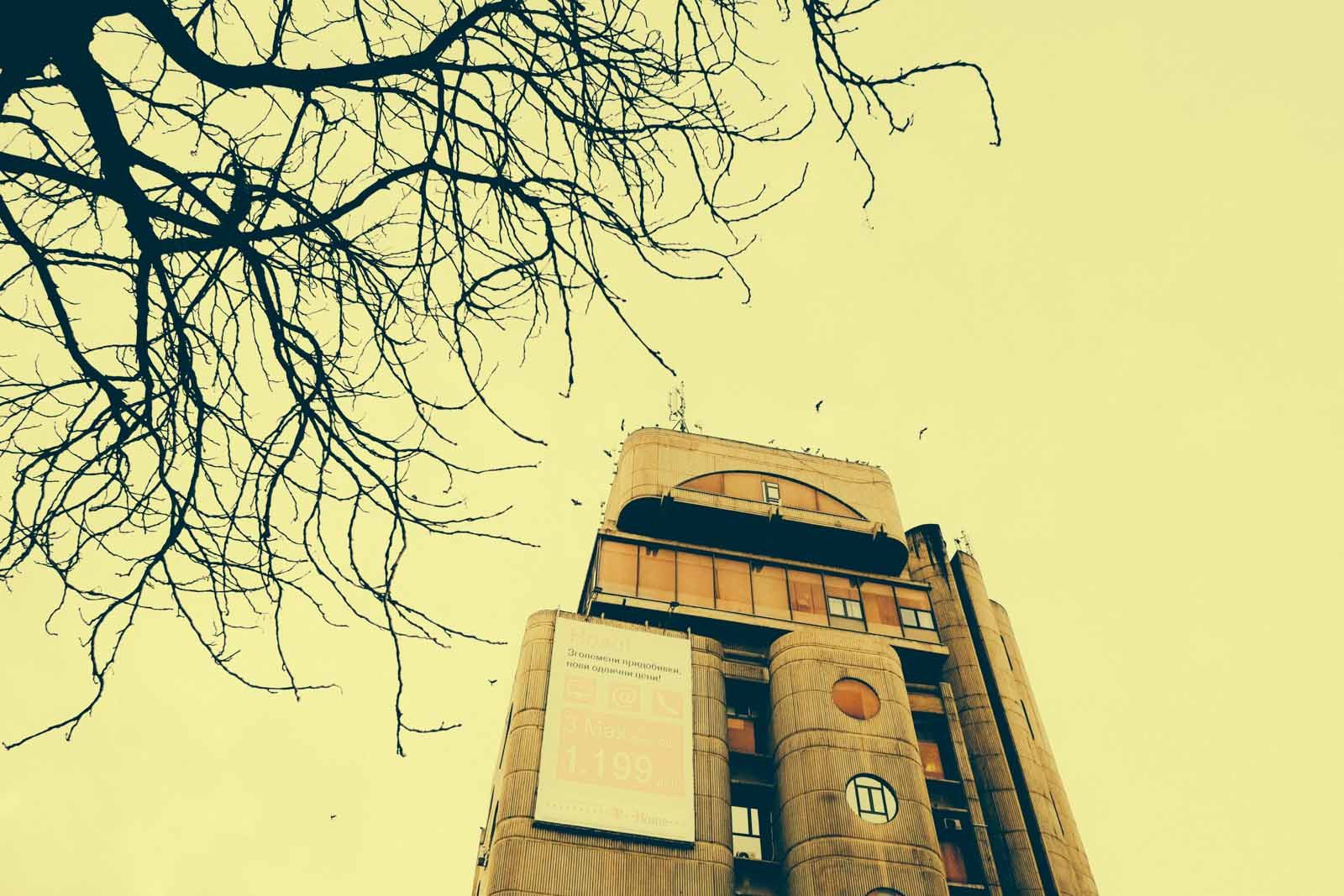 Skopje, capital city of Macedonia, is a dream world for lovers of cosmic concrete communist-era architecture. There is a reason that no other city on Earth has as many examples of brutalist architecture. There’s no tactful way to say this – the abundance of magnificent structures, is all due to a catastrophic earthquake that killed over 2000 people, and destroyed more than half of the buildings in this ancient city. In 1963, Skopje was flattened. In 1965, Japanese architect Kenzo Tange was selected as the winner of an international competition to redesign, and rebuild the city centre.

Napier – the small New Zealand city where my travelling partner Phillipa was born, suffered a similar fate. The great quake of Napier in 1931 occurred right at the peak of the Art Deco movement. Napier was destroyed, and then rebuilt, all in the early 1930’s. As a result, the city can rightfully claim the title of “art deco capital of the world”. Back in Skopje, 1963, the architectural trend wasn’t art-deco, it was modernist, with a particular focus on concrete brutalism. Unlike Napier, Skopje has yet to capitalise on its architectural heritage. I would suggest a new tourist slogan – “Skopje – Brutalist Capital of the World”. Perhaps it’s not as catchy.

Examples of brutalist architecture – a style typified by geometric themes and raw concrete – occur all over the formerly communist area of Yugoslavia. In Zagreb, in Belgrade, and in nearly every small town, exist examples from this era. However, it is the legacy of Kenzo Tange, that makes Skopje so special in this regard. Locals are indifferent about memories of the Yugoslavia communist-era in general, however most people I have spoken to when visiting these buildings are familiar with Kenzo Tange. And whether they are particularly a fan of this style of architecture or not is beside the point – it’s clear that the positive impact Kenzo Tange had on the community of Skopje, in the wake of a devastating natural event, will not soon be forgotten.

And this is the part of the article where we deal with some problems of terminology. Macedonia, officially “The Republic of Macedonia” or “The Former Yugoslav Republic of Macedonia” depending on which international body you are speaking to, declared independence from communist Yugoslavia in 1991. The naming issue is telling, for a country whose government is seemingly hell bent on rebuilding its history (some people would say rewriting history), even the name of the country may not be final.

Due to a dispute with Greece, and in particular the Greek region just across the shared border also known as Macedonia, The Republic of Macedonia was admitted to the United Nations only with the provisional name of FYROM. But this soviet-esque abbreviation is already out of favor with many UN members. Apologies to Greece, but it appears the name FYROM will be going the same way as Rhodesia, The Dutch East Indies, and Upper Volta. To most people around the world, Macedonia, is Macedonia.

Brutalist, Modernist, But Not Communist Architecture?

Macedonian naming issues aside, there is another problem when referring to this style of architecture. Of course, it isn’t “communist architecture”. Kenzo Tange was certainly not communist, for a start. However, the fact remains that all of the architecture featured in this article, was indeed constructed during a period in which Macedonia was a part of “communist” Yugoslavia. I should also add that the Yugoslavian leader Tito ruled his nation seemingly benevolently, and was a much loved politician. There was no Iron Curtain in Yugoslavia, despite that this is the very region where the term originated. Much like China today, or the United States for that matter, Yugoslavians were encouraged to be capitalist consumers. They didn’t suffer restrictions on leaving the country, as was occurring in much of the rest of Eastern Europe during this period. So the issue of “communism” is complex in the case of Yugoslavia, and beyond the scope of this article.

Kenzo Tange and his Japanese team aside, the other architects of these structures may or may not have identified as communists, or socialists. The term is used these days, simply to denote a period in time. For westerners, the term communist architecture has come to denote the stark, efficient, cosmic, brutal, distinctive and unique style of Balkans area architecture that was often decidedly different from what was being built elsewhere. Personally, I think it’s a beautiful style. A venture into the interiors of any of these buildings will show that both form and function were frequently mastered.

With a population of around half a million, Skopje would be considered a small city. In its compact layout, it holds more brutal architecture than any other comparable city on Earth. It doesn’t have the suburban fields of concrete apartment buildings found in the “Blokovi” of Novi Beograd in Serbia, or to a lesser degree Novi Zagreb in Croatia, but the depth of architectural brutalism in Skopje is perhaps more astounding. Almost all of the buildings featured are all easily accessible, located either right in the center of the city, or within a few minutes of it.

Unfortunately, the Macedonian authorities do not share the same love of this contemporary architectural heritage. Many of the brutal and modern buildings of the communist era remain in government hands, and yet many are being allowed to decay. It won’t be long before some are past the point of no return. In a country that is suffering horrendous unemployment, you could be excused for thinking that the not-exactly-wealthy Macedonian government simply doesn’t have the time, resources, or money to maintain these buildings. However, this is not the case.

Skopje is currently in the thick of a construction boom. Museums, upgrades to Parliament House, decorative bridges, and more are being constructed everywhere. There are hundreds of bronze statues being erected all over the city center. I have never seen so many statues in one city. This initiative is all about Macedonian identity. The issues are deep, and the history is complex, but essentially the government has decided to prioritise, create, and invest in the ancient/historical Macedonian identity – at the expense of maintaining the absolutely unique and contemporary stock of buildings that were created in the second half of the 20th century.

I’m not entirely sure what the point of the new Las Vegas/Disneyland-esque government sponsored construction drive is. For such a small city, it’s an extreme, and costly, effort. Skopje’s locals are divided, but I think it’s safe to say most are against the government spending such large sums of money on what is a fairly kitsch effort at creating a national identity. It’s hard not to draw comparisons back to the propagandish era of communist Yugoslavia. The architecture itself is perhaps best described as tacky, albeit grand. However, tastes vary, and they change – and Skopje’s new architecture may yet prove to be a hit with tourists. Only time will tell.

Yugoslavia in the 1960’s must have been a truly fascinating place. Skopje, in 2013, is definitely a fascinating place. The city center holds concrete masterpieces sitting alongside every possible era of architecture from the last two millennium. An ancient Castle fortress looks down from one side, and the worlds biggest cross sits atop an inner city mountain on the other. On one side of the Vardar river that cuts through the city center, is a ancient neighbourhood that could be straight out of Istanbul. On the other, the city square with an enormous “Man On a Horse” statue (just don’t say it’s Alexander the Great, believe me) is a pleasurable and walk-able area normally bustling with activity. Connecting the two areas, is the Stone Bridge, built about 700 years ago – on top of much older Roman foundations. The layers and the contrast is unique for any city of this size.

I love this city. If you visit Skopje, I’m pretty sure you’ll love it to. It’s changing very fast at the moment. You could visit Skopje now, or in a few years when the construction dust has settled. Either way, it has something for everyone, is inexpensive, the locals are friendly, and you will just not believe your eyes when you get here.

And despite what this this collection of photos is telling you, Skopje is far more than just a communist era brutal concrete wonderland.

UPDATE 8th May 2013. Below is a photo of a modernist style government building in the center of Skopje, designed by architect Peter Mulichkoski, from 1970. Personally, I think it’s a great building, but it was left it from the original article above as I was concentrating more on the concrete brutalist style of architecture. However, this is a great representation of just what is happening in Skopje. The facade on this building will be changed, at a cost of 10 million Euro dollars, from classic 1970 – to a faux, or fake, neoclassical style facade. Personally, I see this as tragic. In my own city of Perth, Australia – a building from the 1960’s which holds the local government council was once considered the “ugliest” in the city, and plans were made to demolish it. Now, the same building is one of the favourites in the whole city. You only get one chance to retain your architectural heritage.

UPDATE 28th May 2013. There has been an article written in the news portal kurik.mk . The conclusions drawn appear to be inaccurate and misleading. If you can read Macedonian, or are from The Republic of Macedonia, I suggest you read this article, written by Nova TV in response to the original article: http://novatv.mk/index.php?navig=8&cat=6&vest=3966

UPDATE 30th December 2014. A reader has advised of a public protest against the “Antiquization” of architecture in Skopje. There is a youtube of the demonstration, held in snowy wintery conditions underneath the Alexander the Great statue in the center of Skopje. The protest concerns the GTC shopping mall – the “Gradski Trgovski Centar”, but more generally the people are calling for an end to the fake Baroque facadism that is consuming the best of Skopje’s architecture.  It makes me incredibly happy to know so many people are against the destruction of one of the finest collections of mid-century architecture anywhere on the planet.

UPDATE February 2018. On a personal note, I have returned to Skopje many times since this article was first written – almost every year, often more than once a year. In May/June of 2017 I spent more than a month in Skopje, staying (of course) in one of the Socialist-era apartment blocks in the center of the city. I’ve grown increasingly attached to both the city, and it’s citizens.

BTW, I would love to send you the next dispatch, posted from some-where random around this planet (and you'll soon find out why YOMADIC email followers are my favourite followers):
Macedonia architecturecommunist architectureKenzo TangeMacedoniaSkopje